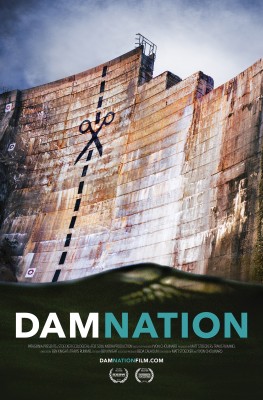 I am incredibly excited to announce that Mother Lode River Center will be hosting a FREE screening of the new Patagonia film, “DamNation” on Saturday, August 30, 2014 at 9PM on the main beach. The following information was taken directly from the DamNation website and Press Kit.

This powerful film odyssey across American explores the sea change in our national attitude from pride in big dams as engineering wonders to the growing awareness that our own future is bound to the life and health of our rivers. Dam removal has moved beyond the fictional Monkey Wrench Gang to go mainstream. Where obsolete dams come down, rivers bound back to life, giving salmon and other wild fish the right of return to primeval spawning grounds, after decades without access. DamNation’s majestic cinematography and unexpected discoveries move through rivers and landscapes altered by dams, but also through a metamorphosis in values, from conquest of the natural world to knowing ourselves as part of nature.

DamNation‘s filmmakers have done their documentary homework. Rediscovered archival footage and pristine vintage photography reveals the young archaeological “salvage” team working against time to recover priceless Anasazi artifacts before the flooding of Glen Canyon in 1958. We meet singer Katie Lee, who was among the last to experience the canyon and, at the age of 94, still recalls the vivid beauty of its walls. Her nemesis, Floyd Dominy, the long-time Bureau of Reclamation czar who dammed Glen Canyon, exudes his pride in his power to alter a landscape. We also hear from dam defender Congressman Tom McClintock and dam critic, ex-Interior Secretary Bruce Babbitt.

Most of the voices in DamNation ring far from the lobbied halls of our capitols and closer to the heart of a river. We hear the smoldering outrage of a Nez Perce elder recalling from his youth the flooding of his people’s sacred falls and fishing ground along the Columbia, and the quiet testimony of a river keeper who has manned his post 12 hours a day for 13 years to count, observe and protect an Umpqua River steelhead run. And DamNation is not without its action heroes, including the activist/artist who two decades ago painted under moonlight a giant crack down the face of Hetch Hetchy dam.

When we were asked by biologist Matt Stoecker and Patagonia founder Yvon Chouinard to collaborate on DamNation, our first instinct was to pass, though we were incredibly humbled by the offer. A good environmental documentary should leave you surprised, engaged, informed and empathetic. It was hard to imagine that a film about dams – forbidding, inanimate concrete structures – could ever capture an audience like that. We eventually came to our senses and agreed to take the film on, but we were scared shitless. The legacy of dam construction in the U.S. is more controversial and complex than we imagined.

In the summer of 2011, we hit the road in a borrowed camper van with nothing more than a laundry list of dams and a quiver of cameras. As the miles, months and dams began to stack up, it soon became clear that our original vision of a year-long project would take much longer. We were hard-pressed to find a free-flowing watershed, and finding an intact fishery was impossible. A century of shortsighted development had left American rivers in ruin. Dams were everywhere, thousands of them. I hadn’t really noticed them before; it’s only nature to turn a blind eye to something so common. But here we were, confronted with monolithic walls like Glen Canyon, which had drowned an Eden of red-rock canyons, or the Lower Snake River dams, which had traded a salmon run for a barge transportation system.

Actually, our timing couldn’t have been better. American Rivers, the prestigious conservation organization, had named 2011 “The Year of the River.” The largest dam removal projects in U.S. history and perhaps the world were underway. Two massive projects were happening in Washington State, and two more were to follow in Maine. The demolition crews were basically experimenting because there’s no textbook. Dam removal had never been done before at this scale, not even close. Even the scientists were stumped. No one knew if migratory fish would actually come back after a 100-year hiatus from their spawning grounds, and there were major concerns about how to handle the mountains of sediment that had built up behind the dams.

We remember starting to feel as though our job was important. It felt like we were capturing something truly historic. Unfortunately, we felt unwelcome almost everywhere we filmed. We hardly went a day without hiding from someone or needing to trespass to get the shot we were after, and we nearly got arrested on one ill fated kayaking trip down the Snake River. If we wanted a shot, it was always more effective to ask forgiveness than to ask permission. I never would have imagined it would be necessary to build a camera blind and dress like a bush to avoid a surveillance helicopter while filming a dam removal.

As with most things in life, the more we learned, the more we cared. We wanted to humanize this cold subject as much as possible, and if it weren’t for the people we met along the way, we wouldn’t have a film. The people we found were incredible. The Earth First! activist who rappelled down the faces of dams in the ’80’s to paint giant cracks in the dark while security slept nearby. The Nez Perce elder who watched his sacred tribal fishing grounds disappear under a dammed Columbia River. A man who’s spent more than 13 years holding vigil over endangered steelhead in Oregon. A fiery, 94-year-old activist who’s been raging against the Glen Canyon Dam for most of her life. A trio of pro-dam politicians Hell-bent on thwarting dam removal at all costs and a group of boaters taking a historic journey down a Washington river that was flowing freely for the first time in a century.

All said and done, DamNation has taken three years to complete – more than twice as long as we expected. The beauty of spending that much time filming is that we actually got to see rivers come back to life in real time. Salmon and steelhead pushed above former dam sites in Washington within months of the rivers running free. Sediment-filled reservoirs transformed into verdant corridors divided by a newly cut river channel.

After witnessing the incredible resiliency of nature that comes with the relatively simple gesture of dam removal, we now realize how much value there is in restoration and how little value many of the tens of thousands of dams in the U.S. are actually delivering. In a way, dam removal reflects a shift in societal values from the need to conquer nature to letting nature do what she does best.

As DamNation progressed, our initial reluctance to take on the project quickly evolved into a total dedication to make the best possible film we could imaging about the dam removal movement. Nothing came easy. My hair is grayer, and it’s taken a toll on Travis too. I had my first and second anxiety attack during this edit. One involved the closing scene in the film, but you’ll have to watch it to find out. This was hard one, but it was worth every ounce of effort. Working with Matt and Yvon and all the passionate people involved in river restoration was an absolute honor that will be difficult to ever match. We hope DamNation inspires people to give a little more thought about the health of the rivers in their backyard.