Time spent in nature is vital to my well-being but I know that this is not true for everyone. 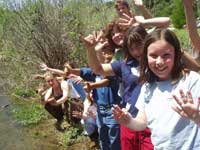 Given the option, some would pass on the opportunity to slog an over-loaded pack uphill for several hours; make camp amongst mosquitoes and bears; sleep virtually not at all night after night, and eat things that require medication to either start or stop movement once ingested. Understandable. However, I am of the mind that everyone should try it–at least once. You don’t have to go to the lengths described above, but do go…get out, especially if you have kids and they have friends. Take on a little camp dust; get s’mores-sticky; lose a night’s sleep- it is SOOO worth it! Consider it an investment.

Need some motivation? Some totally informal and non-sanctioned studies have shown that there is a direct correlation between how close to the ground you get and your righteous-camping enjoyment level. There is also a theory being kicked around, which postulates that human immune systems benefit from the bacteria found in dirt. Spending time outdoors has additional benefits for our kids.

The author of Last Child in the Woods; Saving Children from Nature-Deficit Disorder, by Richard Louv (see Wikipedia entry) makes the connection  between children’s present behavioral problems and a lack of time spent outdoors. I’m not sure I’d call it a disorder, but I do see his point. Gone are the days (it would seem) when kids just go outside to play, enabling them to work off some energy, make some noise, challenge themselves, and just get dirty. That was the mantra of my childhood. Who knows; maybe my strong constitution can be directly linked to all the dirt I got under my nails as a youth and ingested in my trail mix in later days. I believe that there is an indefinable “something” that comes from interacting with the natural world- be it the empty lot or mountain trail-that doesn’t exist within the realms of fantasy computer games or even indoor sports and I encourage adults and youth alike to go out and find “it.”

Wherever and whenever possible- even in the smallest way- let me channel my mother when I say, “Go play outside!”.