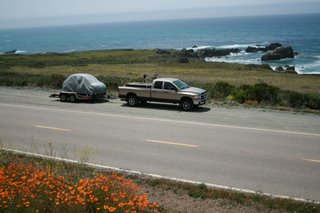 What is a Solar Trifecta? This is it!

Picturesque is not what you necessarily think of when you mention solar power, yet this view of Highway One just south of Monterey is about as close as it gets. How is it a “Solar Trifecta”? Check this out:

First, the Dodge truck you see here pulling the trailer is soon to become the main gear shuttle vehicle for our American River rafting expeditions this season. It is currently completing its conversion to 100% waste vegetable oil (WVO) at GreaseKings in Sacramento and will join the EcoBus as the first 100% WVO powered whitewater river rafting transportation system in use on the American River. Similar to EcoBus, this truck requires the installation of a second fuel tank to contain the WVO, an electrically controlled fuel management valve to switch from the Diesel#2 fuel tank to the WVO tank, a countercurrent exchange system to heat the WVO, and a special filter system to both heat and purify the WVO before it enters the sensitive fuel management system of the Cummins turbodiesel engine of this 2005 Dodge Ram 4×4 pickup. Also similar to EcoBus, using 100% WVO will achieve an 80% reduction is greenhouse gas emissions. However, this improvement will occur not only for our rafting shuttles but for food shopping and errands, all while achieving approximately 17 miles per gallon of WVO. Amazingly, this is better mileage than we get with our current Toyota T-100 with a V6 gasoline engine. Not only will we be saving carbon, our mean fuel cost for WVO is 50 cents per gallon or approximately one tenth the current cost of petro products!

Second element in the Trifecta: six solar hot water heating panels hidden in the bed of the truck. Our solar guru and benefactor, Allen Carrozza, is generously loaning them to the River Center to expand our solar hot water heating and educational opportunities. These panels will reduce the propane required to heat hot water for showers, etc., all by a whopping 73%.

Third in the Trifecta is the object under the cover on the trailer behind the truck. Yes, its “PLUGRIN”, the electric car we are transporting from Santa Barbara that is being lent to us by Dorothy Pearce. It will be recharged from the photovoltaic panels attached to the front of the Solar Energy Exploratorium. This four passenger car has a range of 35 miles, a top speed of 25 mph and will be used to draw attention to the SEE as well as to run errands to Coloma. Such cars are of increasing interest and a similar car, the “ZEN” or Zero Emissions Neighborhood car, was recently featured on the front page of the Sacramento Bee. With gas prices rising above $4 per gallon, interest in electric cars is no longer academic.

We now will be able to collect vegetable oil from local restaurants in Coloma with an electric car, recharge the car with our PV panels, then power our larger vehicles with the WVO. Solar power makes the electricity to power the electric car, solar energy creates the vegetable oil through photosynthesis, solar energy from the panels will heat the water that warms the WVO while we refine it. A solar scenario that’s renewable, cheap and near zero carbon emissons. The Solar Trifecta, and you saw it first here at Mother Lode!