Sorting Through the “Green” Stuff at MaLode

There is a lot to learn about making your home, business or lifestyle “Green”. Here at the River Center we have discovered that if you want to learn how to save money and reduce fossil fuel consumption most cost effectively, it pays to stop listening and start thinking. Yes, more information is good, but so much of it consists of confusing “infomercials” for a new kind of “Green Consumerism”.

Take energy for instance. In 2007 when we drew up our Greenhouse Gas Action Plan (GAP) we were aware that most folks associated solar energy with photovoltaic (PV) panels. In fact, our neighbor had recently installed a fancy new set of PV panels that made us, quite frankly, envious. We heard there were tax credits and good deals to be had, and dreams of PV panels began dancing in our heads.

Then we did the math. Once we ranked the sources of our greenhouse gas emissions in the GAP, we discovered that not only was our use of electricity comparatively low, it largely came from pre-existing hydroelectric sources which produced very little new greenhouse gas to operate. In fact, most of our greenhouse gases were coming out of the tailpipes of our vehicles, not from our electric pole. 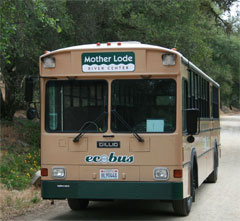 This led to the EcoBus and our fleet of vehicles powered by waste vegetable oil (WVO), a fuel that produces 80% less carbon emissions than conventional fossil fuel.

Furthermore, we discovered that after vehicle fuel, our next largest producer of greenhouse gases was the heating of hot water with the fossil fuel, propane. Alan Carrozza, our solar expert, then suggested that after insulation, solar hot water heating was our next logical energy investment and that it would be much more cost efficient than PV electricity.

This motivated our first solar water heater, a simple “passive” system that cost approximately $1500 and which produced 28,750 BTUs of energy daily. To compare this system to PV we convert BTUs, a measure of thermal energy, into to kilowatt-hours by multiplying by the factor .0002931, resulting in 8.43 kilowatts. An 8.4 KW photovoltaic system would cost approximately $1000 per kilowatt or $84,000. Bottom line, the solar hot water heater produces the same energy 56 times more cost efficiently than the PV panels!

Just for a point of reference, we asked our neighbor if they had installed a solar hot water heater since, like the average American homeowner, over 33% of their energy is used to heat water. Predictably, the answer was no.

How could this be? These folks are not dumb; on the contrary, they are very smart, idealistic, and trying to do the right thing. What we realized, however, was that they were just like us, at risk of becoming victims of “Green Consumerism”. Like other forms of consumerism, the green variety claims that if it costs a lot, is fashionable, and or looks green, it must be green. Clearly, this isn’t true. BP and its “beyond petroleum” advertising campaign are a great example of “green consumerism” and it is no coincidence that they are the largest seller of PV panels in the US, yet they don’t sell solar hot water heaters at all. Why? Less profit!

We learned several things from this experience. One is that the mantra, “Reduce, Reuse, Recycle” is actually very logically sequenced.
Unless we Reduce what we consume first, the Reuse and Recycle have a hard time reducing the net impact on the planet. As the video “The Story of Stuff” points out, the stuff we already produce would require 5 planet Earths to be sustainable. Furthermore, when we produce stuff, it is always “Toxins in, Toxins out” and those toxins always end up somewhere. Since toxins concentrate in biological systems, it turns out that human breast milk has the highest concentration of toxins of any food we consume. Wait a minute, can that be right? Check it out at www.storyofstuff.com. Once you do, you will probably agree that we should all take the advice of Daniel Goleman who proposes in his book, Ecological Intelligence, that we do the math and determine the total ecological cost of everything we buy, and let these numbers guide our purchases.

So what does this all mean at MaLode? No doubt it won’t surprise you that we now heat all our hot water at MaLode with solar energy. This requires three separate solar heaters of two basic types: active and passive. Each system “pre-heats” the water from the well with solar energy before it goes into a propane water heater. This ensures that the hot water is at the desired temperature and neither too cold (it is warmed up with propane to the target temperature), or too hot (it is cooled down by being mixed with more cold water). The passive system is best suited for a lower volume use such as the kitchens. Both types of system reduce propane use by approximately 70%.
We are particularly proud of the “active” system that powers the showers and which was designed by Alan Carrozza (pictured on the left) and completed last winter by our tenant, Cornelius (on the right). In this case an electronic brain senses the temperature in the solar hot water heating panels. If the temperature is higher than the water stored in the solar hot water reservoir tank, an electric pump is activated to circulate the water from the panels to the solar reservoir. This system can produce more hot water than the passive system, which is why we chose it for the showers where we encounter our highest volume of hot water use.

So ends another happy chapter at MaLode. We are excited about moving forward, albeit deliberately, toward energy independence and ecological sustainability. This season one of our guests suggested that we use a super efficient steam engine he has invented, which derives its energy from solar thermal panels, to turn an electric generator that would produce our electricity. Hmmm, Stay tuned. In the meantime, we look forward to your next visit and, by the way, use all the hot water you want. That is, if you can wring it out of the low flow showerheads donated to us by PG&E!

See you on the River,
Scott and the MaLode Crew