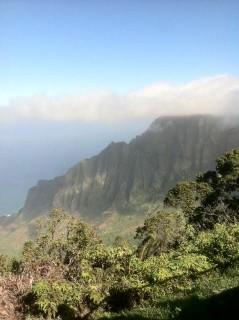 My wife and I are in Kauai enjoying Christmas with our family. It is great to be here and to be together revisiting one of our favorite places on the planet.

A lot has changed in the 30 years we’ve been coming here and yet the attraction of the Garden Isle is still strong for us. The charming cottage we once stayed in was destroyed by the largest storm ever seen in Kauai, Hurricane Iniki, and the entire area has been heavily developed with luxury accommodations for enormous numbers of people. The beaches and trails are crowded. The spinner dolphins that amazed us 30 years ago were not seen this time and our chances of seeing them are much lower given the decrease in their population numbers by 66% (NOAA). Over the same period the human population has increased by 150% from 4.6 billion to over 7 billion. More humans = fewer dolphins: is there any good news?

I think there is good news, and examples are found both in Kauai and in my home of Coloma. Despite development concentrated in places such as Poipu, the efforts of conservationists have helped Kauai remain one of the least developed of the Hawaiian Islands with the majority of the landmass continuing to be protected from development. The ecologically crucial wild areas on the NaPali Coast and in the Wiamea Canyon are still wild and stunningly beautiful and an indigenous rights movement is growing.

In Coloma, also impacted by a record storm in December of 1996, the resulting flood did not open the gates for new development in the riparian zone of the South Fork of the American River because it was effectively prevented by people who care deeply about it. Instead the river has increasingly been appreciated as a vital economic and environmental resource. In 1982, 70% of the riparian zone was private property and threatened with development while only 30% was protected. Today these statistics are roughly reversed and 70% of the riparian zone is permanently protected due to Federal, State and County land acquisitions (15,000 acres so far) largely brokered by the locally established American River Conservancy (ARC). An El Dorado County Management Plan has protected the river itself and through the work of the river community in collaboration with the Sacramento Municipal Utility District, recreational flows for rafting are now federally mandated for the next 50 years. The environmental advantage of this is that the direct experience of rivers that rafting represents educates the public on the value of preserving not only the South Fork, but all rivers. Just as in Kauai, experiencing wild nature directly can promote awareness of its value. The challenge is to preserve such places for future generations and to manage visitation to avoid damaging the resource in the process.

There is no doubt that environmental challenges are mounting as human impact increases. As these success stories show, however, the concentration of human impacts in centralized areas with the conservation of wild and ecologically critical areas can make an important difference. This is the essence of the “leave no trace” philosophy.

Whatever ones politics, the threat to other species that habitat destruction by human activity poses is agreed to be critically important. Conservation work in our local communities, nationally and globally is something we can all support and that deserves our active participation. Another term for this is stewardship and we at Mother Lode have seen it effectively promoted by the direct Experience of wild nature, Connecting with it, improving our knowledge base and powers of Observation, all of which motivate the acts of Stewardship our planet badly needs. This is ECOS and it is what we will continue to dedicate ourselves to during 2015, our 41st season.

(For more on ECOS and the mission of MaLode go to “About” and “Stewardship” on the uppermost navigation bar.)

See you on the river,

Scott and the MaLode Crew