It’s cold and raining…again. We definitely could use the rain after these last few years of drought, but it’s hard not to long for the warm spring months ahead when the rivers run wild, and boating conditions are at their best. 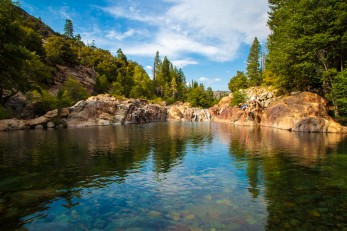 We had some great runs in the spring last year outside of the American River, my favorite of which was probably our descent of the Middle Fork of the Yuba. The Middle Yuba is a tough stretch to plan for because the dam just above doesn’t schedule regular releases, so most of the time the water is too low to boat on, trickling down at a few hundred cubic feet per second (cfs). And even when the releases do happen, the flow is often still not enough for river running. However, one of the biggest spring storms brought so much water down the watershed that water spilled over dam, creating a one day window for us to hop in a raft and ride the rapids down to Oregon Creek.

When I say “a raft”, I mean a singular raft. Unfortunately, since it was such short notice and also because it was raining and flows were unpredictable, we had several last minute cancellations from the Malode crew. Suddenly, our eight person trip was down to just three of us. The flows the day before had peaked at 9000 cfs, and from what we’d gleaned from guidebooks and internet guides, the optimum flows were supposed to be between 1500 and 2500 cfs. Right before we left for the river the next day, the flow was 3000 and falling, which was perfect. Even though there were only three of us (Lindsey, Seth, and myself), we knew it might be a long time before such ideal conditions would happen again on that stretch of river. So off we went.

When we got near the put in, the gate to the dam was locked, so we parked and started feverishly changing into our river gear and pumping up the raft. We had about a half mile to carry the raft on our heads and didn’t know how fast the water level was dropping, so we were in a hurry. The river gods must have been with us that day though because just as we were about to start carrying the raft, a huge crane-truck came down the road and unlocked the gate. The driver, with his smiling, saint-like face, offered us and our raft a lift.

When we got to the dam, we asked the driver if he wanted to ditch his job for the day and come with us, but he graciously declined. Water thundered down the hundred foot wall of concrete. We hauled the raft down the slippery slope of granite and started down river.

We all took turns guiding. The first few rapids were nice warm up class III rapids, and quickly dropped into a gorge filled with larger class IV rapids with slalom routes, and sticky holes that tried to keep and surf our small raft. The the two paddlers continually had to reach way out and pull the raft out, while whoever was guiding in back would be sunk sometimes up to the waist. Lindsey was launched from his guide seat into the front and crashed into the first aid box, gashing open his chin. The rain relented at times and we relaxed during the sparse bits of slack water, enjoying the lush, deep canyon walls. We pulled over at a tributary creek and hiked up among the neon moss, saw beaver tracks and the whittled stumps of willow it had snacked on. We scouted when we could on the larger rapids and were feeling like our run couldn’t be more perfect. We successfully ran a couple large class IV+ rapids, one of which was relentless and must have been at least 3/4 of a mile long. Another required a precision route around two giant boulders while lining up to blast through three big holes along the way.

After that one, we thought we were done with largest rapids; we’d read in a guide book that there was one class V on the run and thought that was it. Imagine our surprise then when we found ourselves suddenly and furiously paddling to eddy out above a huge roar of whitewater. We nearly made an eddy on river left and were fighting the boil line for what seemed like eternity, but we were slowly losing ground and eventually rode up on a boulder. Lindsey was still holding on to a willow upstream. Seth and I lunged way out, trying to get our paddles into the eddy. We all saw the boat start to wrap against the boulder and quickly jumped on the high side. The boat slid back down and pivoted slowly into the main current of the class V rapid; we’d just have to read and run it. We squared up to two big holes and then back paddled into a channel on the right, which looked like the only clean way to go despite a near vertical chute that crashed into a churning hole. As our boat came free of the last hole, we all looked at each other for a moment in disbelief before howling with joy and piling on top of each other.