The Garden: Weeding Out Greenwash 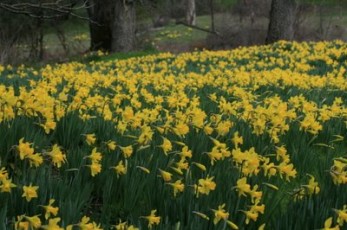 It’s been pouring rain here for the last few weeks, and during the small breaks in the storm, we’ve managed to put some of the finishing touches on our garden expansion. We’ve also started seeds in the greenhouse–carrots, broccoli, lettuce, peas, tomatoes, corn, and herbs of all sorts are all getting off to a good start. But I have to admit, a few days ago, after lifting what felt like the 10,000th heavy shovel full of wet soil, I couldn’t help thinking, “Why exactly are we doing this again?” Sure, it’s nice to eat garden fresh vegetables on your river trip, and most of us have heard that eating locally grown, organic food is “green”, but in a world awash in “green” rhetoric, it’d be nice to know how this project actually helps us achieve our goals.

Promoting Healthy People:
So is a tomato or ear of corn grown in a small scale organic garden like ours more healthy than their store-bought counterparts? To put it bluntly, yes. Big time. There are several reasons for this, one of them being the harvesting and shipping factors involved in large scale operations. Store bought produce, even certified organic varieties, must be shipped to stores an average of 1,500 miles, which can mean weeks in a box. Time is the biggest thief of nutrients, with some vegetable varieties losing up to 50% within three days of being picked. Another factor is ripeness; farmers can’t harvest at the peak of a crop’s ripeness, leading to comparatively tasteless, less nutritious produce. According to Robert Shewfelt, professor of food science at the University of Georgia, “When you pick something at peak flavor, it is about the same as picking it at peak nutritional value.” Studies have also shown that produce loses significant nutrition from bruising during mechanized harvesting and shipping processes that damage cell walls, allowing nutrients to escape and oxidation to occur.

Another reason for nutritional disparity is the difference in soil quality and quantity. For over 70 years, soil scientists from the USDA have been warning farmers about the rapid depletion of soil and soil nutrients due to unsustainable farming practices. And the fact is that today, the average depth of topsoil on North American cropland has diminished from around 21 inches down to 6 inches. At the Earth Summit Statistics Meeting in 1992, research showed that farmland in the US is 85% micro-nutrient depleted. By continually building up our own soil with compost generated by our guests and rotating crops properly we can keep growing nutritionally superior crops here at camp.

The produce grown in the US contains as little as 62% of the nutritional value of that produced in 1950. This is partly because on large farms, modern crops that grow larger and faster are not necessarily able to acquire nutrients from the soil at the same, faster rate. A good analogy is a body builder all pumped up on steroids; while it may look impressive and fit, many of the muscles have absolutely no utility and the bodybuilder isn’t necessarily healthy. It’s the same for mass produced crops. They’ve been selected for their yield, size, and speed of ripening traits, not for healthy root systems, which absorb more nutrients. Information about this “dilution effect” has been available for almost 30 years, but there have been no reforms in government to encourage farmers to grow healthier crops, only incentives for them to grow more and more crops. Factor that in with less, nutrient depleted soil, and you have a crop containing as little as 62% of the nutritional value as that produced in 1950.

A more hidden aspect of the nutritional deficiency in standard crops is lack of diversity. Different varieties (cultivars) of the same vegetable vary widely in the amount of nutrients they contain. A researcher named Eitenmiller studied the nutrient composition of different types of apples, peaches and other fruit, for example, they found variation in Vitamin A levels as high as 20 times. Another food scientist, Robert Shewfeld reports that carotene levels in any given vegetable often vary by a factor of 10. It is easier to grow a larger variety of crops in a small scale operation because you can monitor each type and adjust watering and feeding for their specific needs. Last year at Mother Lode for instance we grew 8 different types of tomatoes and plan to grow even more varieties this year.

Our garden program addresses that goal by educating our guests about the process of growing food in a sustainable way and empowering them to go and do it themselves. There have been several studies on the benefits of garden programs in schools, almost all of which show positive behavioral changes towards eating healthier, even in the absence of positive attitudinal changes.

Our garden curriculum focuses on methods that anyone can use, whether they live in urban or rural environments, even in areas with poor or depleted soils. One example is our simple raised planter boxes that anyone can build. in which we will be replicating a method of gardening developed by gardening guru Jacob Mittleider. Previously unusable soil is built without chemicals by adding nutrients and organic materials. Mittleider’s method’s have utilized vast amounts of what was once considered unusable land, especially in 3rd world countries. Another example we teach about is hay bale gardening, possibly the easiest way to start a growing crops on your own.

Living in Balance with the Natural World

Henry Brockman, a small-scale organic farmer and author from Illinois rightly asserts in his book Organic Matters that we must produce food “in a way that enhances life,” and “instead of a vicious cycle, create a virtuous cycle.”

One strategy we use to accomplish this is by designing a permaculture garden. Permaculture, in short, is the harmonious integration of design with ecology. The use of long-living food crops like fruit and nut trees is an important part, as well as fostering the ecosystem in which you live. Sometimes this is counter-intuitive. Hornworms are a common problem for most people who grow tomatoes, including here at Mother Lode, but what we learned is that they aren’t just a pest designed to spoil crops, they actually were here long before we decided to plant crops. Hornworms are the pupa form of the Sphinx moth, which pollinates the evening primrose flowers growing in the riparian habitat. So instead of killing them as I was taught to do as a kid to protect our tomatoes, it makes more sense ecologically to transport them to the stands of primroses near the river, where they can continue playing their role in the ecosystem.

Another similarly related view that we’ve gleaned from is biodynamic agriculture, a creation of Rudolph Steiner which looks upon the soil and the farm as living organisms. Biodynamics puts heavy emphasis on composting and soil preparation and maintenance that supports abundant microbial life. These microorganisms are responsible for a wide variety of beneficial processes, from breaking down complex compounds into simpler ones that plants can use, to fixing nitrogen from the air in a form available to plants, to devouring harmful nematodes. This living, pulsation in the soil preserves its vitality for the plants in
another way too; they tie up essential nutients in their bodies and then release them slowly as they die and decompose. Using the methods of biodynamics will help us revitalize our soil instead of continuing to exhaust it.

The shovel feels a bit lighter after considering all the reasons why we’ve undertaken this project. Growing our own, healthier crops for us and our guests to enjoy, and growing them in a way that preserves and even benefits the surrounding ecosystems is definitely worth all the work and research. We hope to see you here on the river (or in the garden on the river) soon.