P.S. That probably includes you!

The annual meeting of the Planning and Conservation League (PCL) held on January 10, 2008 in Sacramento was a gala event involving 330 activists, planners and attorneys with the theme ”A State of Change: How Californians Can Change the World”. Featured speakers included California’s Lt. Governor John Garamendi; Attorney General Jerry Brown; and State Senator Darrell Steinberg. Founded in 1972, this organization is one of the most prestigious and respected organizations dealing with environmental issues in our State. I recommend membership! 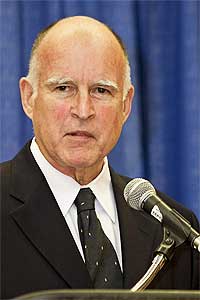 I imagine most whitewater boaters are like myself, they wouldn’t recognize the movers and shakers of Sacramento politics if they bumped into them head-on. It was a shock to me, as I paid the steep admission fee for my daughter, Adriane, and myself, that I recognized a host of familiar faces. It was like a “Who’s Who” of river conservation in California.

First I noticed the lanky and silver bearded Jerry Meral, a legendary boater and one of the founders of (FOR) Friends of the River and (TRPT) the Tuolumne River Preservation Trust. Jerry played a key role in saving the “T” from being dammed, hence the name of the put-in: “Meral’s Pool”. Jerry later became President of PCL and played a vital role in crafting the series of California bond initiatives that have provided funding to preserve our riparian watershed and other environmental treasures. It is possible you’ve seen Jerry on the South Fork yourself without knowing it.

Next to Jerry was my neighbor on River Road in Coloma, Jonas Minton, another frequent floater of the South Fork, who successfully mediated the California State Water Plan and has since mediated water issues in China. Then I bumped into another Coloma native, Traci Sheehan, current Executive Director of PCL, who cleans up very nicely I must say. I usually see her wearing a kayak skirt. The list went on including Doug Lindsey, now a well-respected Environmental Consultant, who recalled how he met his wife while guiding at Mother Lode years ago. It was truly old home week.

It only got better though, because the prestigious “California Environmentalist of the Year” award was presented to another Coloma native Bill Center, owner of Camp Lotus, who was accompanied by his charming wife Robin and increasingly famous kayaker son Charlie. Bill, in the words of the award’s presenter, was “the person most responsible for helping bring SMUD’s Upper American River Project re-licensing on the South Fork of the American to a conclusion that favored wildlife, fisheries and recreational boating.” Many of you may recall this is the agreement that mandates recreational flows for whitewater boating for the next 50 years. Historic!

Those of you who wrote letters during 2006 on Mother Lode trips should feel honored too. In fact, you were honored! Bill mentioned you that night and has thanked you for your efforts multiple times since the agreement. He even has a code for you, “the Chinese water torture”. That’s probably how it felt to the SMUD Board of Directors as the MaLode guides and I appeared at meeting after meeting presenting the seemingly endless stream of letters you wrote (over 1300) supporting the “Alternative Proposal” that had initially been rejected by SMUD. That proposal ultimately greatly influenced the re-licensing agreement. It was the right thing to do, and the resulting compromise agreement was a true “win-win” for both SMUD and the river community. Yet it took your voices, Federal and State Agencies, and the voices of many others passionate about this river, to turn the tide.

That evening I reflected over the thirty plus years and the more than twenty thousand letters Mother Lode participants have written, the over one dozen California rivers that are still rivers instead of lakes, over the thousands of rafters that have been enchanted by the magic of these special places, and I couldn’t help but smile. We thank you, our participants and friends, for your vital role in this struggle. You are members of a very special family.

As the meeting closed, Bill Center was installed as the new President of PCL and as Bill, Robin, Jonas, Traci and I followed each other home to the little town of Lotus/Coloma, I reflected on what a great place this is and what a treasure the South Fork truly represents. I am honored and humbled to be in the company of such a great collection of friends and colleagues and to be able to share this special place with you all. Remember, the Stanislaus River still lives in our hearts.

Hoping to see you “Eco-Rafting” on the river this season,

One Response to “PCL Honors South Fork of the American Heroes”